To emerge as one of the best Women’s Institutions in North East India and a College of Excellence empowering women.

To impart value based education to transform women students into beings with scientific outlook and social consciousness who are ethically, morally, intellectually, physically and emotionally sound to fit and flourish in the complex pluricultural society. 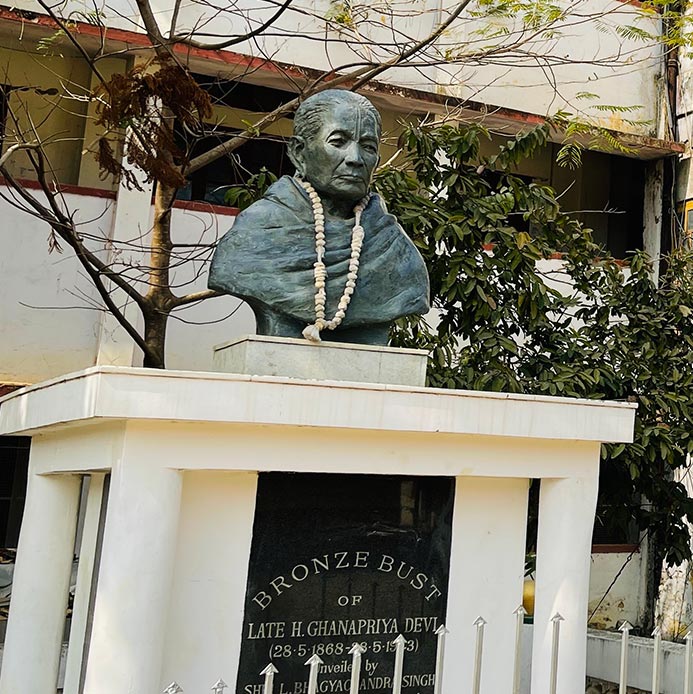 “Establishment of the Ghanapriya Women’s College, Imphal popularly known as G.P. Women’s College is associated with the advancement of women’s education in the state. With a view to encourage women’s education in Manipur in public interest, institution exclusively Government Girls’ College, a premier State Government meant for women, was established by the bifurcating the erstwhile D.M. College in 1964 and the session in the same campus. Shri Hidangmayum Dwijamani Dev Sharma, a leading educationist of Imphal, donated a sum of Rs.1 lakh for the Institution and Government Girl’s College was renamed as The Ghanapriya Women’s College, Imphal after the name of the donor’s mother, Hidangmayum Ghanapriya Devi.”

The Ghanapriya Women’s College was then shifted to the present campus in the old Lambulane, Jail Road, in the vicinity of the Raj Bhavan, Manipur after a period of 10 years in 1974 with a specific plan and vision of the State Government in order to separate the premier institution from D.M. College, Imphal. The present campus of the D.M. College of Arts, Imphal was originally the campus of The Ghanapriya Women’s College, Imphal. The foundation stone of the Ghanapriya Women’s College, Imphal was laid by Shri D.R. Kohli, Lt. Governor of Manipur on 11 January 1972 and the institution was inaugurated by Shri Yangmaso Shaiza, Chief Minister of Manipur on 14 August 1974. Many eminent academicians, scholars and sports persons, etc. have been produced by the institution so far. The college imparts undergraduate courses in different science and arts subjects. In 2016, G.P. Women’s College started imparting Post-graduate courses in Life Sciences (Botany and Zoology). Since 2018, the college is offering Post Graduate Courses in 12(Twelve) Departments under Dhanamanjuri University. Ph.D. programmes are also undertaking in many subjects. The college had been accredited B Grade by the NAAC (National Assessment and Accreditation Council, an autonomous body established by the University Grants Commission) on May 21, 2006 and reaccredited with CGPA of 2.01 on four point scale at B Grade on November 15, 2015.

The GHANAPRIYA WOMEN’S COLLEGE, Imphal – a NAAC accredited College, more popularly known as G.P. Women’s College is one of the institutes of higher studies dedicated for women in Imphal city area under the Government of Manipur. The College was established in 1965 with the specific purpose of taking care of the women students studying in various co educational institutes in the state and also in fulfillment of the demands of a wide spectrum of educationists and intellectuals who had been clamouring for a long period of time for such a separate college exclusively meant for womens. GPWC stands at the very heart of the Imphal City surrounded by the Raj Bhavan on the North, Imphal Central Jail on the South, Central Jail Road on the East and State Central Library on the West encompassing four acres of land. The college was affiliated to Manipur University, Canchipur and at present is one of the five constituent colleges of the Dhanamanjuri University, Imphal. For women, GPWC is an exciting centre of academic excellence.

DESIGNING YOUR FUTURE
Since its inception in 1965, G.P. Women’s College, Imphal has been trying with all its sincere efforts to provide access to higher education for women in the state up to the post graduate level following the academic curricular of the affiliating universities, Gauhati University, Guwahati, Assam and Manipur University, Canchipur in the past, and Dhanamanjuri University, Imphal at present.

“LIGHT AND LEARNING – to render education that will lead women from darkness to light, from ignorance to knowledge and from the unknown to the known” – basically aiming at empowering the women in all respects/aspects.

The academic programme in GPWC is flexible enough to provide students the benefits of horizontal mobility and elective options. The formal courses are designed on multi-disciplinary considerations to suit the requirements of the students. In addition to the teaching programme of the courses, the college also provides facilities for National Service Scheme (NSS), National Cadet Corps (NCC), Arts & Culture and Games & Sports . Annual Freshers’ Social Meet, Literary Meet and Annual Inter House Sports Meet are held in a grand manner every year. The college also participates in Annual Inter College Youth Festival, State level debating competition and different State level Sports events with a view to sensitizing the students about the various college activities.

Faculty members of the college actively participate in the University level activities relating to academic calendar, syllabi drafting and many other college development programmes. GPWC, Imphal is part of the syndicate of the Dhanamanjuri University and is responsible for framing of academic programme of the cluster college of Dhanamanjuri University. At present, the college is trying hard with all its sincere efforts to go beyond the conventional degree oriented academic boundaries in commensurate with the pedagogical transformation at the National and International levels arising out of globalization, so as to meet the aspiration of the new generation of learners and impart value based quality education to women students for their better future.